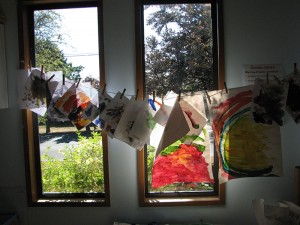 Our preschool, so named because of its location, held its first class in May of 1970 and was located in the Gordon Head United Church on Torquay Drive. A small group of mothers headed by the first president and the first teacher, organized and “begged, borrowed and bought” materials to set up the first class of less than 15 children.

The school grew to 30 children in 1971 and 45 soon after. By the end of the school year 1972-73, the group had increased to sixty children. The playground began to take shape when the fathers erected the fence around the yard in the spring of 1973. In September of 1983, the preschool packed up and followed the Gordon Head United Church to its present location. The new grassy playground soon became a muddy area and volunteer families worked together to build yet another playground. The grass and mud were replaced with bark chips and has been maintained that way to this day. Fundraising has largely made it possible for the preschool to constantly update and replace equipment both indoors and out to ensure a safe and healthy environment for our children. The school expanded its programming in 2008, introducing a 2nd ECE, as well as an afternoon childcare program.

It should also be mentioned that we are very fortunate in that the preschool is located in a small building next to the church and above a thrift store. It is bright  and cozy just like home – and the kids just love it!!

In 1994 LPP&C celebrated its 25th Anniversary with a reunion and in 1999 LPP&C helped the VICPA celebrate its 50th anniversary by holding another reunion that over 135 past students and parents attended.

During the 2022/23 year, we will be moving to a new location. We are excited to call Lambrick Way House (4135 Lambrick Way) as our new home. Follow us on Instagram and Facebook for more updates on our move!